Winter Golf by Train in Ayrshire 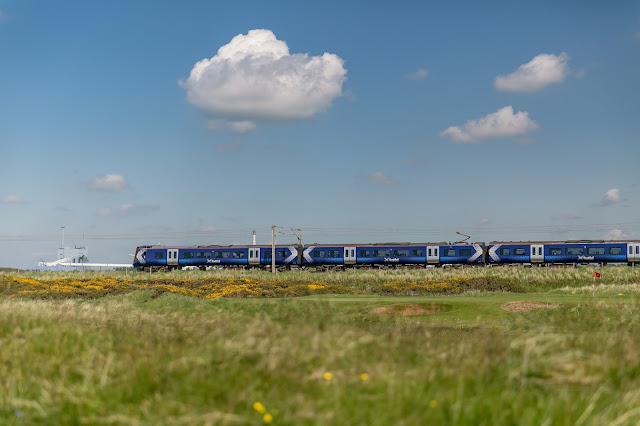 While many a golfer may travel abroad in February to escape the harsh Scottish winter for some warm sunshine golf, I decided to brave the elements and headed off on a golf adventure to Ayrshire by rail.

After purchasing a Spirit of Scotland rail pass, packing a light travel bag filled with plenty of warm clothing and a pencil bag on my back, I set out for the coastal railway line of Ayrshire which passes many of the area’s finest golf courses.  The railways acted as the catalyst for the expansion of the game at the turn of the 20th century and Ayrshire is a part of Scotland where that history and tradition is still evident.

My first steps on Ayrshire soil was in the far south in the coastal town of Girvan on a bleak, misty Sunday afternoon with threatening rain-filled skies. A constant ghostly companion of my travels would be legendary Scottish golfer and five-time Open Champion James Braid who travelled by rail to visit, play and design many golf courses across Great Britain. Girvan is one such golf course designed by Braid and nowadays it is run by the Ayrshire council which manages eight golf courses in the region. The opening eight holes run alongside the sea and offered me fleeting glimpses through the cloud and mist towards Ailsa Craig before one crosses the road and turns inland for the second half of the course. I completed the game just before the weather turned to complete rain but it was also a close call in running back up the hill to the station to catch my connecting train south.


After an early game at Stranraer Golf Course Monday morning, Braids final design in Scotland, I journeyed northwards on a single track line past lowland glens dotted by the odd sheep, ancient stone walls and the flowing waters of the Stinchar river before arriving to coastal views at the historic golfing town of Prestwick where the first Open Championship was played in 1860 in the early afternoon.


The train station is directly beside the first tee of the golf course and strolling around town there are many areas of interest depicting the golfing significance of the place such as The Red Lion Inn where the first championship was planned, a plaque to commemorate where the first shot of that 1860 Open was hit and a memorial plaque in the towns graveyard to Andrew Strath, a former Open Champion and Keeper of the Green at Prestwick before his untimely death.

Awaking from a fine night’s sleep at the Golf View Hotel overlooking the course, I hit the links early Tuesday morning at 8 am amid brightening sun-filled surroundings. The course is a throwback to the origins of the game and there are still six greens that exist which were part of Old Tom Morris 12 Hole layout. Names of holes such as Alps, Himalayas and Cardinal have influenced the game worldwide and every year golfers descend to the links to pay homage to a national golf treasure.

I had time for a quick spot of lunch in the clubhouse before hurrying to the station to catch a train to Troon where a friend of mine working on the course guided me on a walking tour of Scotland’s most recent Open venue, The Royal Troon Golf Club. Some winter renovation work on the first tee shall enhance the vistas out across the beach towards the Irish Sea, Ailsa Craig and the distant Isle of Arran. Famous holes such as The Postage Stamp and Railway naturally stand out but it is also very interesting to see much environmental work on the course helping to conserve and enhance the areas local flora and fauna particularly in regards to the small blue butterfly project.


Royal Troon no.11 by the railway

On a cold, grey Wednesday morning I returned south to Ayr to ramble around the old town and see the many tributes to Scotland’s most famous Baird. A scarf was wrapped around the knee of the statue of Burns in the square while pigeons had made a home on both shoulders. There are further interesting places to see in the town such as Tam o' Shanter Close and the William Wallace Tower monument to mention but a few.

A warm broth was needed to warm the bones, before returning on the train to play the links of Barassie, another course influenced by Braid that is full of heathland heather, broom and gorse over the opening holes before a short walk to the newer nine which run alongside the ever-present railways.

I faced a raw, bracing cold wind Thursday morning when leaving the homely and quaint Tigh Dearg (the Red House) B&B. I walked the short pitching wedge distance underneath the railway tracks to the municipal courses of Troon, of which there are three. Even at 7.40am, there were many golfers gearing up to play the courses on such a sharp winters day which is a testament to the dedication, love and maybe madness the Scottish people have for their game. I decided to play the Darley course which has a par 71 and is one of the trickiest municipal courses one can encounter.

After a much needed hot cup of tea after the round in the recently refurbished clubhouse, I returned to the station to journey on towards West Kilbride where I was meeting a friend from Sweden who had travelled across from Edinburgh. Playing 36 holes in the one day is always a challenge but with the weather getting progressively windier and colder later in the afternoon, the winter gloves were unpacked for the first time on the trip. West Kilbride was a real old-fashioned links next to the seaside and offers panoramic views towards Arran even though it was not visible to us in the cloudy conditions. With somewhat tired legs late in the evening, I gratefully accepted some Swedish generosity of a lift back up to the train station for the final 15-minute journey to the last stop on the line, the summer holiday town of Largs.

An early walk along the seafront promenade and breakfast enjoying improving views out to Cumbrae, Bute and Arran prepared me for the final game of the trip. A friend from Hamilton who spent many summers sailing the Firth of Clyde drove through to join me for the game at Largs Golf Course which enjoys a pretty location high on the edge of the town looking out towards all that is on offer out at sea. A wee testing course that kept us both entertained with a Swiss-style looking chalet acting as the clubhouse, or so it seemed when walking up the 18th fairway. Traditional Scottish hospitality awaited on the inside thankfully – no cheese or Toberlones on sale here!

On the return east Friday afternoon, through the rush hour commute on the tracks, I reflected on this west coast golfing adventure. I visited seven courses in six days ranging from historic links to Open Championship venues, rugged authentic municipals and coastal cliff tops. There were some winter tees and winter greens, uneven lies and bounces, ground under repair and preferred lies. But there was also some perfectly manicured turf with true rolling surfaces which when all added up led to a true Scottish golfing winter experience with Ayrshire acting as the perfect host.

Leaving the car at home and travelling with the golf clubs by train was indeed a novel way to go discover Ayrshire. It was tough to get off the beaten track and see many of the areas many attractions but golf was the motivation for this trip and by using the railways, I found that many courses were easily accessible - between Ayr and Irvine alone, I counted at least thirteen courses that are visible from the railways.

I never saw another set of clubs on the train during my weeks travel, but through an old-fashioned mode of transport, I found it was still possible to journey as Old Tom and Braid would have done in days past which offered the perfect opportunity to sit back, relax and see more of Scotland. However, my next trip will be pretty straight-forward and one that every golfer knows – a trip to the driving range to work on the swing!

A guest post courtesy of Frank Aherne, of 'Links Fairways'.

Posted by Ayrshire Golf Scotland at 10:55