The Old Loans Inn continues to fly the flag for Ayrshire after being named Small Hotel of the Year for the second successive year, while The Gailes Hotel was also shortlisted at the 2018 Scottish Golf Tourism awards in St Andrews.

Over 90 tour operators and buyers worldwide arrived in Scotland to learn, experience and sample what Scotland has to offer by way of connecting with golf, accommodation
and other providers within the industry.

A two-day series of networking events then took place, including golf’s equivalent of speed-dating with over 4,000 Business to Business (B2B) meetings between Scottish suppliers like SimpsInns and the Old Loans Inn plus Scottish and international tour operators, helping to drive business to Scotland and Ayrshire. 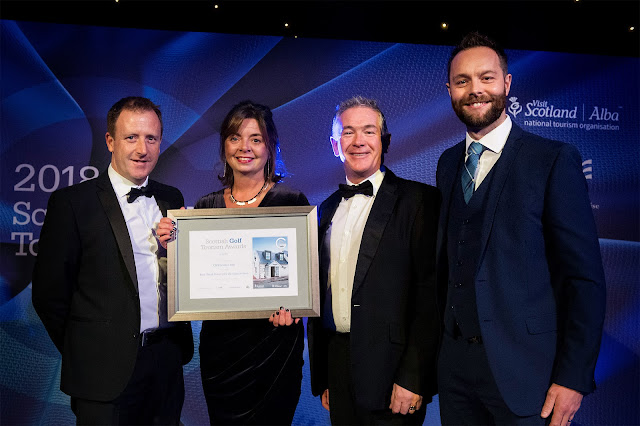 The week concluded with a black-tie gala dinner for almost 500 guests and when the lights went down it wasn’t long before the drama unfolded. In the first award to be announced, the Old Loans Inn was named Small Hotel of the Year for the second successive year.

“I can’t believe we’ve won again, this is a wonderful acknowledgement to all the hard work George (Paton) and his team put in at the Old Loans Inn to make sure all our guests are so well looked after,” explained SimpsInns owner Malcolm Simpson after receiving the award.

“We won this award 12 months ago and to win again makes it very special, especially as the votes came from the general public. We know we have a fantastic product and all of our hotels are so close to the many championship courses within Ayrshire. The Old Loans Inn is just minutes from the first tee at Royal Troon and we have a great working relationship with all the courses in the area.

“To come away with this prestigious award is very special, knowing that we were up against such strong competition.”

The Old Loans Inn’s sister property, The Gailes Hotel, was also shortlisted in the Hotel of the Year category that was won by Murrayshall Country House Hotel.

Malcolm Roughhead, chief executive of VisitScotland, said: “I’m delighted to see award winners right across the country, which goes to underline the outstanding strength in depth of the Scottish golf tourism product.”